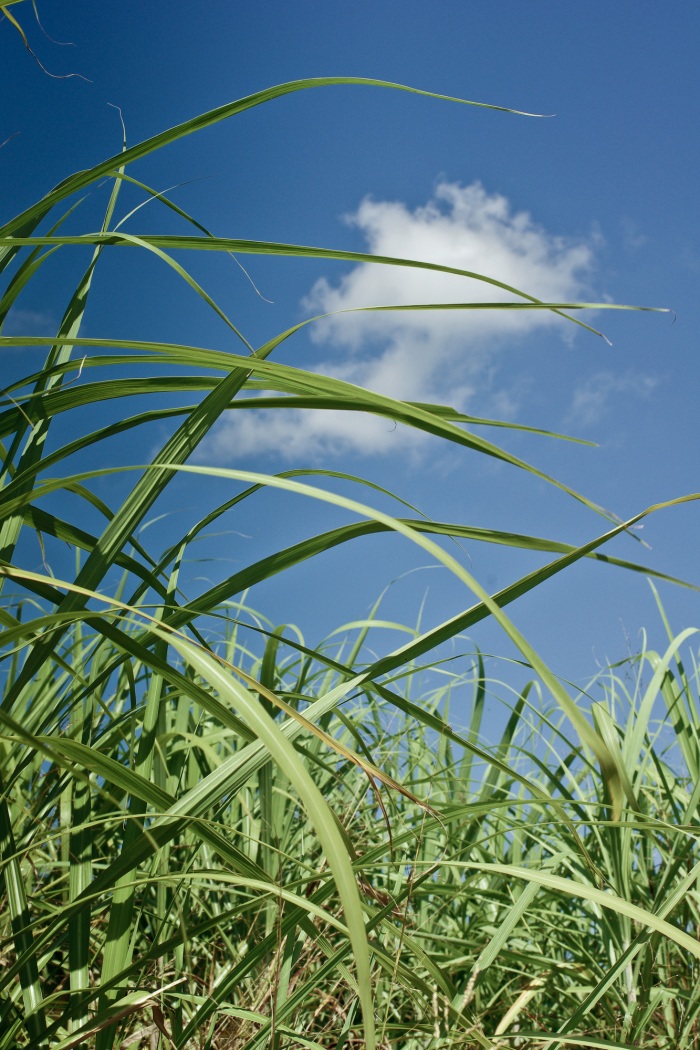 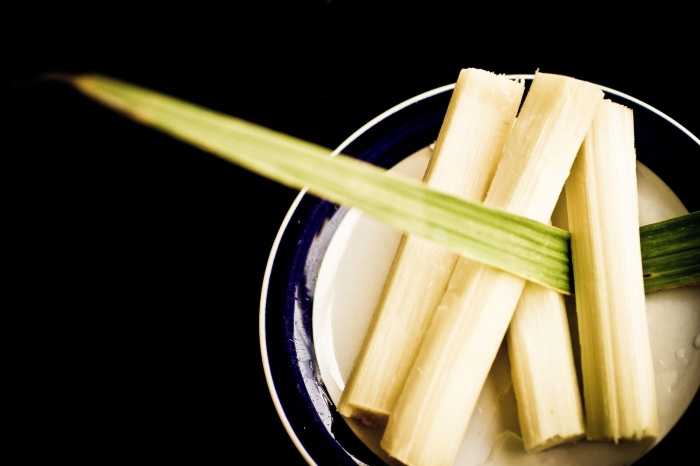 Across the street from The Polidore’s home is a pretty large expanse of sugarcane fields. Jessica Defils took us over to the field and together she and I picked a stalk of sugar cane. Tumbling to the ground from the effort of yanking that fibrous pole from the ground (and there were two of us heaving and pulling). One can begin to imagine what life might be like for a full time cane sugar field worker.
It was purely amazing, though, to stare into that forever expanse of blue, blue skies a few splatters of fluffy clouds and olive-lime green leaves and stalks as far as the eye could see.
Eventually, I tore myself away. I couldn’t help it. My California sense of justice, fairness, compassion, political-correctness and earth fever set in and I vowed to read up on sugarcane and the important role it played and continues to play in The South and in The World. 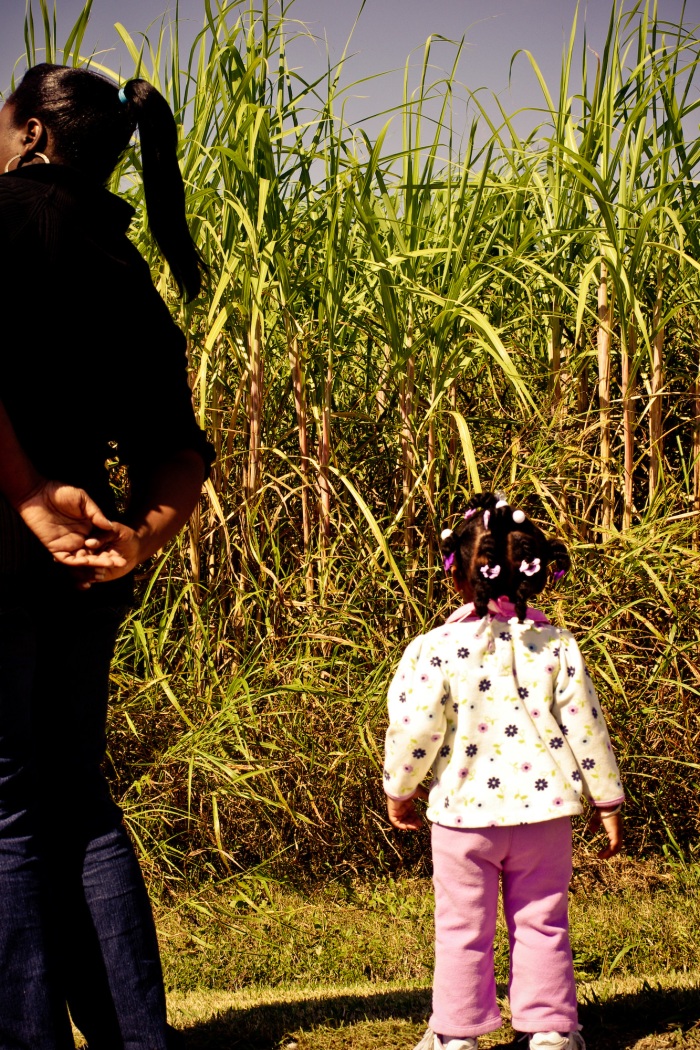 Sugarcane, is one of the most efficient photosynthesizers in the plant kingdom. It’s a C-4 plant, able to convert up to 2 percent of incident solar energy into biomass.
6CO2 + 6H2O (+ Sunlight) —-> C6H12O6 + 6O2
What does that mean, you ask?

Only perhaps the most dramatic natural event in our planet’s history. Three billion years ago, simple, one-celled forms of life appeared, which we now call procaryotes (bacteria); one family of procaryotes was the first to perform the miracle of photosynthesis . This means that these sun-eating pioneers were able to absorb the sun’s energy and use it to digest water and CO2, releasing the precious atmospheric oxygen that later would allow the entire food chain to sprout and flourish in all its rich diversity. The miracle continues to this day. Read more about photosynethis and the miracle of life, here. 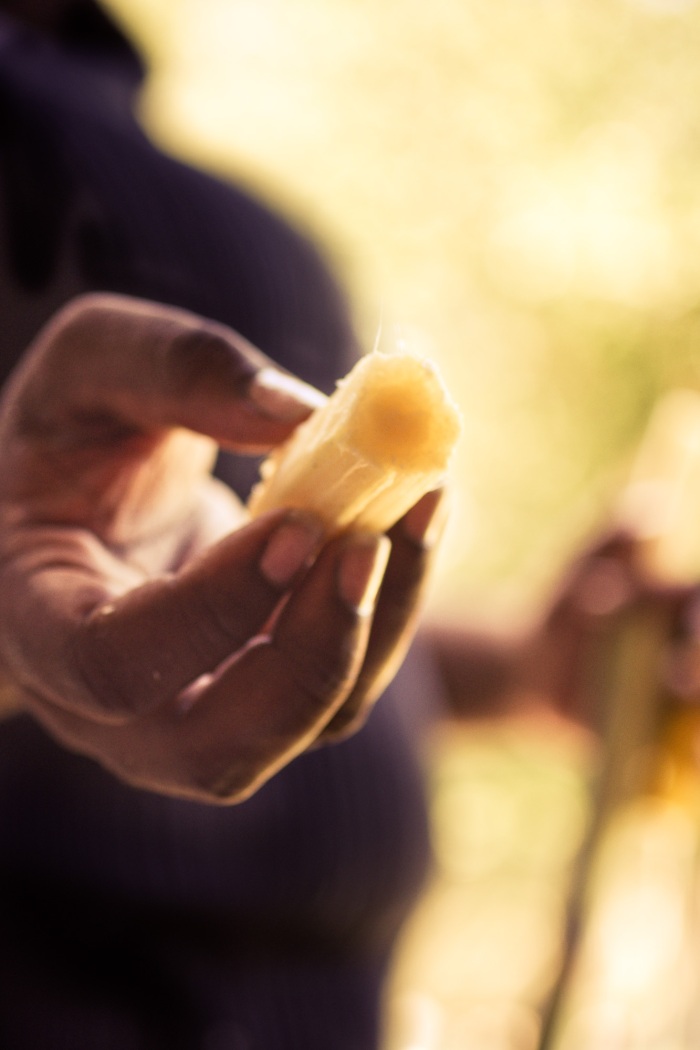 In order to fully understand the history of sugarcane in the United States, start here. Essentially…

Sugar cane, native to Southeast Asia, is a tall grass with sweet sap in its thick, fibrous stalks. It was one of the early crops introduced to the Caribbean area by Spanish and Portuguese explorers, where it flourished.

In 1751, Jesuit missionaries brought sugar cane plants, along with experienced field workers, to what is now downtown New Orleans.
The harvesting and production of sugar cane was labor-intensive, and that fueled the slave trade. By the 1860s, the sugar industry was using 300,000 slaves, according to Richard’s account.

The country’s largest sugar plantation during this period was Houmas House near Baton Rouge, known in its heyday as “The Sugar Palace.”

A huge thank you to Jessica for taking the 30 minutes from her day to show us and tell us all about sugarcane. I have learned so much. So incredibly much from this little micro-focus on locality and seasonality. I had no idea how important and culture-steeped sugarcane truly is.
Sometime in my lifetime I would like to experience fresh sugarcane juice. 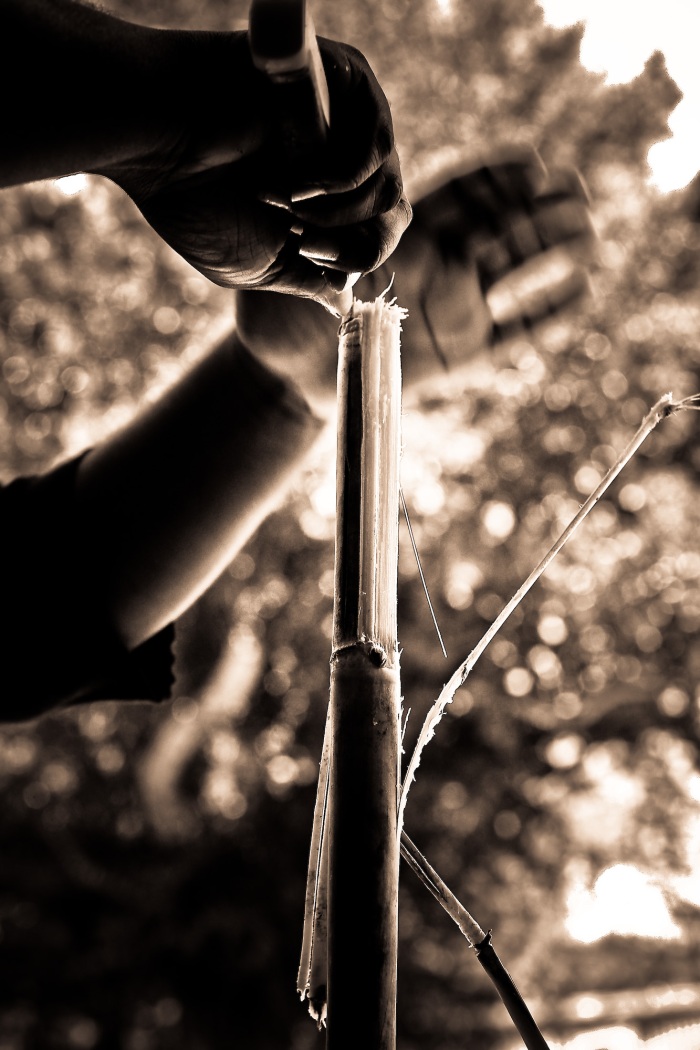 A sugarcane pole is divided into lengths by it’s nodes, or joints. Jessica started out by peeling off the leaves from the different joints. Then she cut off the root and starting as close to the bottom of the pole as she could, she began peeling off the skin by using a knife. Much like one would peel a carrot with a simple vegetable peeler.
When she’d finished peeling a length of node, she would hand it over to one of us in the house so we could crunch down on it and squirt the inside of our mouths with filmy, dreamy sugar juice.

I miss it so much, right this moment.
mmmmm

One thought on “Harvesting Sugarcane”