Aaah the Superbowl. An American football event designed for eating tons of food, yelling at the TV, laughing at ridiculous commercials (and sometimes sneering at their lameness in disgust) and goofing off with good friends and family.

Even I got into the wrestling and rough housing. It both burns calories and helps you follow the old adage “beat or be beaten” or maybe its actually “eat or be eaten”)

I can’t say this was a “dinner” but it was more a “grazing” and “tasting” of some really, really good food. Pops, the patriarch of the family has secret ingrediant laden recipes for his barbecue sauces that no one is allowed to know. Pops’ daughter Traci follows in his footsteps, by producing one of the most moist, creamy cakes I’ve had in a long time. And she would only mumble in my direction the word jello.

They have a right to keep things hush hush. The whole entire family cooks up a storm and backs up what what they bring out of the kitchen. If I moved into their house, like I threatened to do, I would weigh 800 pounds in no time.

And then Sip Snap Savor would be over, because I’d have to be “Whats Eating Gilbert Grape” airlifted outta there. But the main attraction are the kids, not football. Everyone is in love with the kids and the kids are in love with everyone.

The oldest little boy, Charles, wrote his aunt’s name backwards and she immediately folded it and tucked it into a special place to save it. The kids even won the grand Superbowl Squares Betting Board and took home $200 and $100 each. 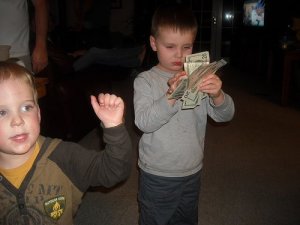 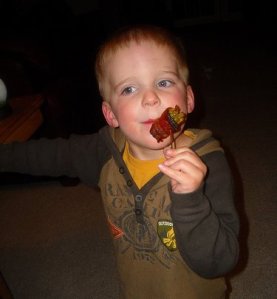 10 LBS Frozen “Party Wings”
Deepfry in batches, on high heat for 20 minutes.
Toss with 48 OZ Wing Sauce. Can be Store Bought if you don’t have a Secret Family Recipe.

1 LB Rinsed, Raw, Green Beans (Marinated in French Dressing Overnight)
1 Package Bacon, cut in half
Wrap a length of bacon around 5-6 stalks of green beans. Secure with a toothpick.
Grill or Bake until Bacon is crispy.